I stand with the people of Ukraine during this heinous assault on their freedoms, their independence, and their very lives.

Managing dotfiles can be tedious process, considering that configuration files for everything from ansible to zsh are located in many different places in the home directory.

Recently, I discovered GNU Stow which is an intelligent symbolic linker (written in Perl). From Stow’s manpage, it’s official description is “a symlink farm manager which takes distinct sets of software and/or data located in separate directories on the filesystem, and makes them appear to be installed in a single directory tree”.

While Stow’s intended purpose was not to manage dotfiles, it’s features naturally lended it to being a superior choice in this regard compared to other labor-intensive methods.

You can download releases for GNU Stow from http://ftp.gnu.org/gnu/stow and for this guide I’ll be using the latest version which is 2.3.1 at the time of writing. The first step is to download and extract stow:

The binary for Stow has to be compiled and does require Perl, but Perl comes pre-packaged on all major distributions these days. The commands to do this are:

If an error message about missing Test::Output module is displayed, this must be installed using CPAN, otherwise the Stow binary won’t work. Use the following commands to achieve this:

After installing the Test::Output module, delete the stow-2.3.1 folder and extract the archive again and rerun the build commands:

If all goes well you’ll have a binary called stow in the bin directory. You’ll need to copy this binary to your PATH:

If you don’t know where to copy the binary, you can list folders that correspond to the PATH variable using the command echo "$PATH" — the listed directories will be separated by a colon.

Once you’ve copied the binary, verify that Stow works:

That command should output the version number of Stow. If an error message is returned that resemlbes the following:

Then you’ll have to install the Stow Perl module in order to fix this:

You can read the Stow manpages for more information, but in a nutshell Stow uses “package” folders whose directory structure correspond to the parent directory that the stow command is run from.

To illustrate the above workflow concepts, I’ll show you a basic example of how I use Stow to keep a few configuration files stored in one place. These are some of the files that I’ll want to manage centrally:

I’m going to keep all of them in a directory called stow in my home folder. Within this directory, I’ll create subdirectories that are known as Stow “packages” and can be given any name, as they exist for organizational purposes only. Below are the “package” folders that I created:

Next, I’ll move (not copy) the files from their original directories into the central location.

Apart from moving and not copying, the most important step is to match the structure of the parent directory transparently.

To illustrate this, below are the commands that I used:

And, the final locations of the files that were moved:

As you can see, the directories and files in each “package” directory are mapped as if they were children of the home (~/) parent directory.

Now that the files and directories are in place, the next step is to invoke the stow command from within the ~/stow directory, specifying each “package” directory by name in order to create the symbolic links:

After those commands are run, the old locations of the files that were copied now become symbolic links to their mapped location in the ~/stow directory, within their respective “package” subdirectories.

If I run an l command in my home directory for example, the .zshrc file will be shown with the syntax .zshrc -> stow/zsh/.zshrc.

Now that my files are in a central location, it’s trivial to schedule a backup job to archive and upload Stow’s directory for safekeeping. It’s also a straightforward option to use Git to keep track of changes, for example: 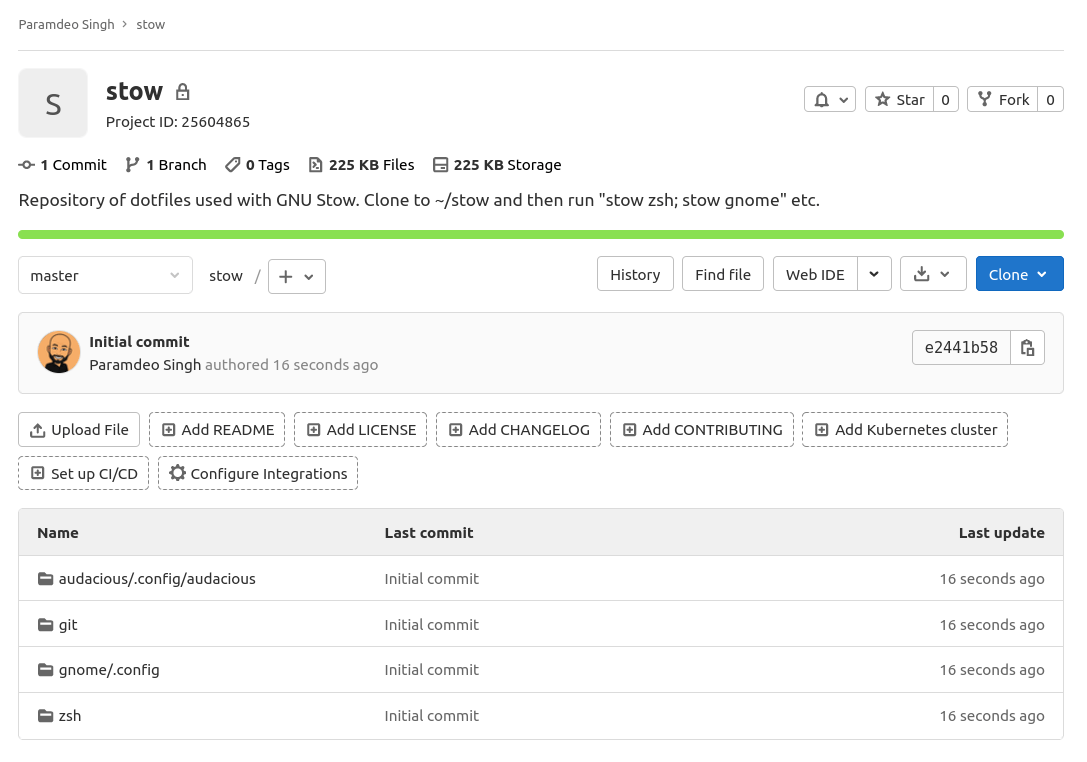 Making a Weekly Habit Calendar with Bootstrap and JavaScript

Code is not Political

Copyright © Paramdeo Singh. Made with ☕️ in Guyana. All Rights Reserved.

Riding the wave of consciousness in this treacherous mortal sea.